ダウンロード
4000358 Rev B
Introducing DOCSIS
1-17
System Elements and Interfaces,
Continued
Network Elements
The following elements are required to support DOCSIS functionality in the DBDS.
•
The downstream channels of the CMTS are combined with the QAM and DAVIC
QPSK forward path signals, and the reverse path is split to feed any DAVIC QPSK
demodulators in the hub and the CMTS.
•
The border router/firewall between the CMTS and the Internet provides
Internet/intranet routing, Network Address Translation (NAT), and filtering
functionality, as required.
•
The headend router between the CMTS and the DBDS private network provides
the path for unicast data between the DNCS and the DHCTs operating in DOCSIS
or Mixed DOCSIS/DAVIC mode.
•
The downstream connections from the CMTS, QAMs, QPSK modulators, and
upstream connections to the QPSK demodulators and CMTS are standard RF coax
(F-type). The QAM, QPSK modulator, and QPSK demodulator each have one RF
interface. (MQAMs have four RF interfaces.) The number of deployed CMTS
devices is specific to the cable service operator and depends on implementation
preferences. The number of downstream and upstream RF interfaces per CMTS or
per CMTS blade is specific to the CMTS vendor.
•
Control connections from the DBDS network to the QAMs/MQAMs and QPSK
modulators are 10BaseT only for QAMs/MQAMS and 10/100 for QPSKs.
•
The connection from the DNCS to the DBDS private network is ATM and/or
Ethernet.
•
The connections between the headend router and the CMTS, between the CMTS
and border router, and between the CMTS and the DHCP server are vendor-
specific. All these connections have the common trait of supporting IP traffic. 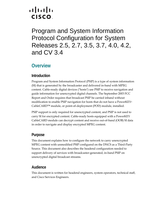 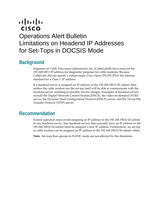