Скачать
long coil
short
magnetic
gap
DISTORTION
The SmartSub drivers incorporate several unusual
design features,  utilized in all THIEL woofers, that greatly
reduce distortion compared with conventional designs. Here
is a brief explanation of three of these.
The purpose of the driver’s motor system is to apply a
force to the diaphragm that is directly proportional to the
voltage supplied by the amplifier. In order for the force to be
directly proportional to the voltage applied, as desired, three
conditions must be met:
• the length of voice coil wire acted on by the magnetic
field must be constant,
• the magnetic field strength must be constant,
• and the current in the voice coil must be directly
proportional to the applied voltage.
In practice, none of these conditions actually exist and
inaccuracy in each is a distortion mechanism. All THIEL
drivers incorporate refinements of design that greatly
improve the accuracy of each of these three factors.
The first distortion mechanism results from the fact that
almost all drivers use a long coil/short gap motor system
where the long coil is acted upon not only by the field within
the magnetic gap but also by the “fringe” field in front of
and behind the gap region. As the coil moves forward or
backward to produce bass energy, the magnetic field acting
on the coil becomes less intense because the coil is farther
from its rest position where the magnetic field is strongest.
This weakening of field strength as the coil moves away
from its rest position is usually the primary distortion
producing mechanism.
The following graph is the magnetic flux density vs.
distance from the center of the gap for a normal, short gap
magnet system. You can see that the field in the gap (darker
region) is less than half of the total field acting on the coil
(all shaded regions) and that the field in the overhung
regions (light grey) is not constant with distance from the
gap. This produces distortion during movement.
To eliminate this problem all THIEL drivers use an
unusual short coil/long gap system where the coil is much
Conventional long coil/ short gap motor system
0
mm from center of magnetic gap
Magnetic flux density
Gap length
Coil length
0
-10
-20
-30
30
10
20
shorter than the magnetic gap. Therefore, even when the coil
moves a considerable distance from its rest position, it
continues to be acted upon only by the uniform magnetic
field in the air gap and does not experience the changes in
magnetic field strength with position as in the conventional
system. The distortion produced by short coil motor system
woofers at normal excursion levels is typically only one-
0
0
-10
-20
-30
30
10
20
mm from center of magnetic gap
Magnetic flux density
Gap length
Coil length
SmartSub short coil/ long gap motor system
4
tenth that produced by normal long coil system. The penalty
of this approach is that a much larger magnet is needed to
power the much longer gap.
In the next graph you can see that as the coil (dark
region) moves through the gap (light region) the magnetic
field remains constant, greatly reducing distortion produced
by this mechanism.
copper pole sleev
copper ring
short coil
very large
magnet
aluminum diaphragm 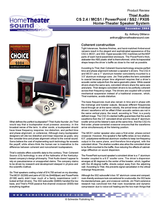