Скачать
PAGE 3
© Schneider Publishing Inc.
w w w . h o m e t h e a t e r s o u n d . c o m
speakers to the sub, "Growing Up" or "The Barry Williams Show"
will reveal that sub’s relative position. The SS2 and PX05 did a
fantastic job of convincing me that the deep bass was anchored to
each speaker.
The PowerPoint surrounds sounded bigger and the CS2.4s delivered
more authoritative bass when the SS2 was added. The massive
drum strokes on Kodo’s "Daraijin," from Mondo Head [SACD, Red
Ink/Sony 56111], appeared from behind me with surprising weight
and slam. Experiencing the  T h i e l s ’ impressive integration was
exhilarating with film soundtracks and music alike. I had never
heard a speaker system that disappeared quite as the Thiels did,
or a subwoofer that performed as transparently as did the SS2.
I was never left wanting for the bracing dynamics of Copland’s
Appalachian Spring Suite, from Eiji Oue and the Minnesota Orchestra’s
S h o w c a s e [CD, Reference RR- 907CC], or Leonard Bernstein’s adoring
interpretation of Mahler’s Symphony 3 [CD, Deutsche Grammophon
427 328-2]. Brass and cymbals always sounded pure and extended,
with a nice balance of shimmer and controlled decay.
The T h i e l s ’ utter lack of coloration and outstanding three-dimensional
imaging made the hair on the back of my neck stand up on end
countless times. Every sound remained anchored in physical space.
The well-recorded score of M. Night Shyamalan’s The Village  [CD,
Hollywood 162464], and such pop recordings as Seal’s newest
DVD-Audio release,  Seal IV [ Warner Bros. 47947], sounded
wonderfully rich and intoxicatingly sweet through the Thiels,
while the system’s considerable speed and resolution made me
tap my foot to the desperate melodies and pulsating bass lines of
synthesizer wizard BT’s  "Lullaby  for Gaia,"  from  E S C M [ C D ,
Reprise 46799].
Coherent competition?
I have been very happy with my Canton Ergo home-theater speaker
system. At a little over $5500, the Canton system provides an
exciting music and home-theater experience at not much more
than a third of the Thiels’ price. The three-way Ergo RC-A is an
incredible bargain; this big speaker’s built-in powered subwoofer
gives it a huge advantage when space is at a premium, with none
of the integration challenges of a standalone sub. And Canton’s
exclusive room-compensation circuit makes speaker placement a
snap. The subs, coupled with the passive driver’s speed, deliver
breathtaking dynamic impact.
The Thiels sounded considerably more refined and coherent than
the Canton Ergos. Although transparent, the Cantons can get a bit
edgy in the upper midrange, a little lightweight in the upper bass.
They also sound a bit unfocused in the low mids and upper bass. T h e
Thiels, however, always sounded smooth and natural across their
response curve. In terms of imaging, the difference between the
two systems is the difference between the accomplished and the
merely competent. The Cantons produce a wide but relatively
shallow soundstage; the Thiels countered with unbelievably composed
and uniformly dense images that extended both in front and to the
rear of the speakers’ baffles — no matter how far apart they were
placed or how loudly they were played.
Bass was where the two systems almost met. Alone, the CS2.4s
produced pure, effortless bass that reached deeper than I would
have expected from speakers of their size. With the SS2 sub, that
bass had more harmonic weight and was perfectly controlled and
extended. The RC-As’ built-in subs offer as much detail and control
as the CS2.4s, but can’t produce quite the level of harmonic
integrity or extension of the CS2.4s plus SS2.
The MCS1 and PowerPoint simply outclassed Canton’s Ergo CM 500
DC center-channel and Ergo F surround speakers. T h i e l ’s coincident
driver enabled the MCS1 and PowerPoints to remain rock-solid off -
axis when compared to the Ergo CM 500 DC’s smaller midrange-
tweeter-midrange design and the Ergo F’s standard two-way array.
Size gave the MCS1 the edge over the CM 500 DC in terms of bass
extension and weight, while the Ergo Fs couldn’t muster the
PowerPoints’ bass detail and refinement.
The Cantons did exhibit a little more high-frequency bite, though by
b i t e I don’t mean extension or detail, but snap and shimmer. T h e
crash of cymbals and the swell of orchestra were a touch more
exciting through the Cantons. Although this could be considered a
slight distortion of the music, it did get my blood moving without
inducing listening fatigue.
While the Ergo RC-A costs about the same as the CS2.4, keep in
mind that the MCS1 is more than twice the price of the CM 500 DC,
and a pair of PowerPoints costs about four times as much as a pair
of Ergo-Fs. So while it’s easy to hear major improvements through
the Thiels, the complete Canton system does a nice job of making
music with perfectly integrated bass for a much lower price.
Coherence concluded
I spoke to Jim Thiel several times while researching this system, and
there was no denying the passion with which he approaches his
work. He explained with boundless enthusiasm his unique design
philosophy and methodology, describing in great detail every
nuance, every nut and bolt. Each question I asked was answered
with an overabundance of description. His grasp of science was as
obvious as his love of music.
The Thiel speakers reviewed here made beautiful music. Their sound
wasn’t sweet or warm or exciting; rather, it expressed whatever
sweetness, warmth, or excitement was contained in the recording.
T h i e l ’s Coherent Source technology has forever changed my
perception of what a great loudspeaker system should accomplish,
especially in terms of subwoofer integration and the stability of both
two-channel and surround-sound images. Is this Thiel system a
Reviewers' Choice? Absolutely. 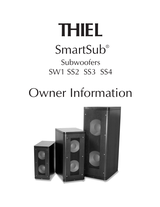 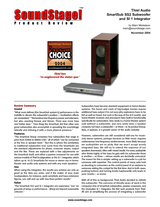