Download
6
XENYX 1202/1002/802/502 User Manual
2.1.3  FX sends, panorama and level adjustment
Fig. 2.3: The FX send/panorama/level controls
FX (1202/1002/802 only)
FX sends (or AUX sends) enable you to feed signals via a variable control from
one or more channels and sum these signals to a bus. The bus appears at the
console’s FX send output and can be fed from there to an external effects device.
The return from the effects unit is then brought back into the console on the
aux return connectors (802) or normal channel inputs. Each FX send is mono and
features up to +15 dB gain.
As the name suggests, the FX sends of the XENYX mixing consoles are intended to
drive effects devices (reverb, delay, etc) and are therefore configured post-fader.
This means that the mix between dry signal and effect remains at the level
determined by the channel’s aux send, irrespective of the channel fader setting.
If this were not the case, the effects signal of the channel would remain audible
even when the fader is lowered to zero.
PAN
The PAN control determines the position of the channel signal within the stereo
image. This control features a constant-power characteristic, which means the
signal is always maintained at a constant level, irrespective of position in the
stereo panorama.
LEVEL
The LEVEL control determines the level of the channel signal in the main mix.
CLIP
The CLIP LED’s of the mono channels illuminate when the input signal is driven
too high, which could cause distortion. If this happens, use the GAIN control to
reduce the preamp level until the LED does not light anymore.
2.2  Stereo channels
2.2.1  Stereo line inputs
Fig. 2.4: Stereo line inputs
LINE IN
Each stereo channel has two balanced line level inputs on ¼" jacks for left and
right channels. If only the jack marked “L” (left) is used, the channel operates in
mono. The stereo channels are designed to handle typical line level signals.
Both inputs will also accept unbalanced jacks.
2.2.2  Equalizer stereo channels (802)
The XENYX 802 features a stereo 3-band EQ in each stereo channel. The filter
characteristics and cut-off frequencies are the same as those in the
mono channels.
A stereo EQ is highly preferable to two mono equalizers. When working on a
stereo signal, as two separate EQ’s will usually produce an unwanted discrepancy
between the left and right channels.
Fig. 2.5: The equalizer of the stereo input channels
2.2.3  FX sends, balance and level adjustment
Fig. 2.6: The FX send/balance/level controls
FX
The FX sends of the stereo channels function similar to those of the mono
channels. However, since the FX send buses are both mono, a mono sum is
first taken from the stereo input before it is sent to the FX bus. The 502 is not
equipped with FXsends.
BAL
The BAL(ANCE) control determines the levels of left and right input signals
relative to each other before both signals are then routed to the main stereo mix
bus. If a channel is operated in mono via the left line input, this control has the
same function as the PAN control used in the mono channels.
LEVEL
The LEVEL control determines the volume of the channel being sent to the
main mix. 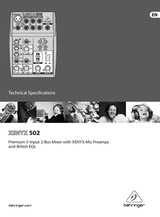 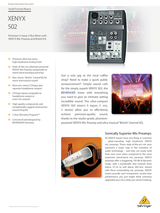